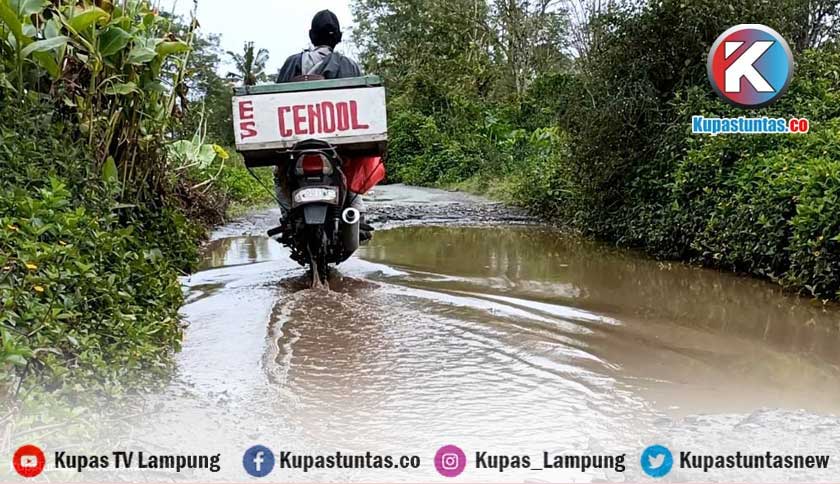 The condition of the road that connects Pekon Sebarus and Padang Dalom is badly damaged, and the government has not repaired it for years. Photo: Echa/Kupastuntas.co

Kupastuntas.co, Lampung Barat - The people of Pekon or Sebarus Village, Balik Bukit District, have complained about the damage to the road that connects Pekon Sebarus and Padang Dalom. This is because the damage was severe enough to cause a gaping hole up to 30 centimeters deep and causing a pool of water.

Kisman, a resident of Pekon or Sebarus Village, Balik Bukit District, said that damage to the road had occurred several years ago and no repairs had been made either from the Government or from self-help communities, even though the road is the main access for the community in carrying out activities.

"This road is the main access for the community, be it students, farmers, employees and the general public. What's more, if it's crowded here in the morning, the majority of the people here work as farmers, so this road is access for selling community agricultural products," said Kisman at the interview. Wednesday, January 25, 2023.

Kisman continued that the Government had taken several measurements of the road which was planned to be built but until now no repairs had been made, even local residents had deliberately planted rice in holes filled with water as a form of protest against the damage that had occurred.

"Indeed, it has often been measured, maybe 2023, they said it would be built, but we don't know because it's impossible to measure, if there is no money (to build it), there are residents here who are planting rice in puddles, maybe because they are annoyed because it hasn't been repaired, so we hope to hurry up repaired," he said.

Because according to him, if the road is repaired, of course the community's activities will also run more smoothly, children when they go to school are also not dangerous and the most important thing is that local people, especially those who work as farmers, can carry out their activities as usual so that the community's economy will increase.

The Head of Sebarus Village, Melki Dafir Zata said, that his party had submitted an improvement proposal in the form of an annual increase in road sections to the West Lampung Regency government through the Public Works and Spatial Planning Office.

"The Public Works and Spatial Planning Office has responded and taken measurements along the road sections that need to be repaired. We hope that the village government will repair them because these roads really help the transportation of agriculture for the community," he said.

In connection with the previous residents planting rice on the road damage that occurred, Melki said this might be a form of protest by the residents because so far the repairs that have been carried out have only been in the form of patchwork, while the damage that has occurred is already very severe and needs improvement.

"Indeed, the condition of the road sections was very bad some time ago, the most severe damage has started to occur since 2020, we hope that the local government, especially the Public Works and Spatial Planning Service, will make these improvements realized considering this is very important for the people of Pekon Sebarus and the people of Balik Bukit in general," he concluded. (*)