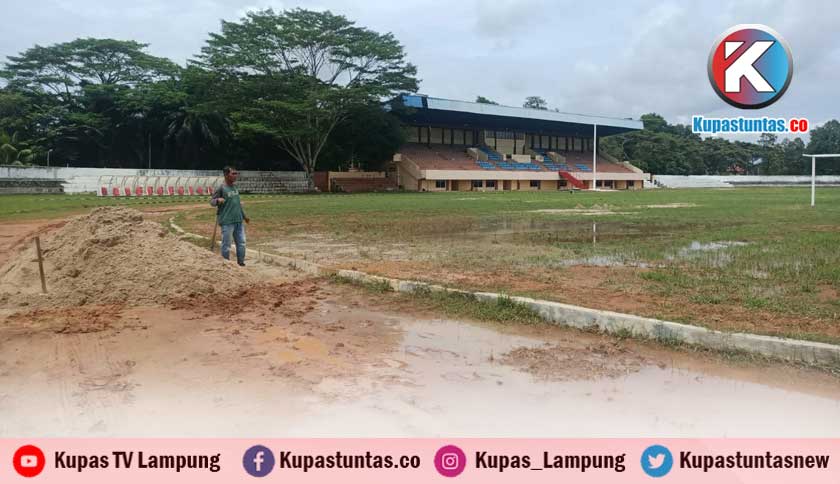 A worker was seen filling the field with sand at the Tejosari stadium. Photo: Arby/Kupastuntas.co 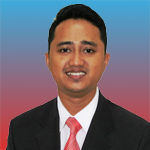 Kupastuntas.co, Metro - A number of sports facilities and infrastructure in Metro City Indonesia were damaged and became public complaints. The local municipal government was asked to respond quickly to complaints and make improvements.

From the observation of Kupastuntas.co, the damage to sports facilities is being complained by the tennis lovers. The complaint arose because the pitch roof leaked during heavy rains. In addition, there are also around 36 holes on the roof of the indoor tennis court in Yosodadi Village, East Metro District.

Then, complaints about sports facilities appeared at the Tejosari Stadium, East Metro District. At that location, you can see that the area in the field and the jogging track were flooded at a number of points.

At the stadium location, two workers were also observed filling up the football field using sand. This was done so that the water that flooded the field could be absorbed immediately.

When confirmed, the indoor tennis court keeper who is familiarly called Abah Lilik revealed that the leak was caused by a broken roof joint.

"What leaked was from one roof to another because it was exposed to rainwater, and the water flowed from between the joints of the roof. It leaked very fast," he told Kupastuntas.co, Wednesday (25/1/2023).

Ironically, the roof that was leaking had not even been repaired for two months. Not only that, the impact of the softball ball is also referred to as the main factor that aggravates the condition of the roof leak.

"So this leak appeared after being dressed, it's been about a month. The last time it was dressed was around November. So after fixing it, it leaked," he explained.

"If the one that was hit by the softball has already been repaired, the leak is even worse after being repaired. So a tub is placed to collect water in the middle of the field," he added.

He and a number of tennis players hope that the Metro City government through the related department will immediately make improvements before the condition gets worse.

"Hopefully, it will be fixed soon, I have also reported the leak to the government," he concluded.

Meanwhile at the Tejosari stadium, workers admitted that they had been piling sand into the field since yesterday. According to information from workers there, the stockpiling can be completed within the next week.

"All of this that has stagnated will be covered up, it's been two days of work, so we don't know when it will be finished, at least until a week," said Madil, a stadium guard who took part in landfilling.

Separately, when confirmed by Kupastuntas.co, the Head of the Metro City Youth, Sports and Tourism Office, Tri Hendriyanto said, the cause of the leak in the roof of the indoor tennis court was due to being hit by a softball.

"It leaked before, we fixed it, now it leaked again, hit by a softball. If you want to fix it, you have to order the goods first and we have ordered them, the goods are not available in Lampung," he explained.

"It's in the process of revamping it, if you replace the roof you have to put one sheet. If it's small it can be patched. We'll definitely fix it even though there's no budget, the important thing is to be good first. The goods come immediately repaired, the order was in Surabaya," he added.

Meanwhile, regarding the water that inundated the Tejosari stadium field, his party is currently carrying out repairs by filling up the puddles using sand.

"Regarding the stadium field, there was maintenance last year but that was beyond the physical maintenance of last year. Last year the field was only repaired with an area of 1 hectare," he explained.

"Now it's been repaired, it's been two days. At the stadium the focus is on stockpiling sand in the field, the grass has also been planted. All we have to do is repair the track, for running," he continued.

Hendri emphasized that the two damaged sports facilities had become a priority for repairs by his party. He targets, the results of the improvement can be felt in the next month.

"The priority for repairs is the indoor tennis court and the stadium. If the stadium has been repaired. If the indoor court is roofed with Onduline and it was ordered two days ago, all that's left is to wait a maximum of 10 days for the goods to arrive, we will work on it immediately," he said. (*)